​Some roads in England may be going electric -- or at least they could make electric vehicles a more feasible form of transportation if a new trial of wireless charging lanes is successful.
"Vehicle technologies are advancing at an ever increasing pace and we're committed to supporting the growth of ultra-low emissions vehicles on our England's motorways," Highways England Chief Highways Engineer Mike Wilson said in a statement.
The goal is to allow ultra-low emission vehicles to travel longer distances without the need to stop and charge, which, in turn would cut down on air-polluting vehicle emissions and gas usage. Currently, most all-electric vehicles can only travel 10 to 40 miles before needing more power. The super-luxury Tesla electric boasts about 240 miles. But the challenge is to make electric charging more accessible, in a way that governments can afford.

Later this year, Highways England will begin off-road tests of charging lanes for electric and hybrid vehicles. They will create mock roads built with charging coils under the pavement, which correspond to special receivers that will be fitted to electric vehicles. If the trials are successful after 18 months, the agency will conduct trials on working roadways. The UK government has committed £500 million ($784 million) over the next five years to advancing this technology.

"The off road trials of wireless power technology will help to create a more sustainable road network for England and open up new opportunities for businesses that transport goods across the country," Wilson said.
Similar projects are in progress in the United States. A Utah-based company called WAVE has tested electric vehicles and various ways to charge them. They ran small pilot programs using in-ground induction charging for shuttles at two Utah universities. A newly-launched trolley in Monterey, California currently uses this wireless sync technology to transmit electricity via magnetic waves that charge the vehicle as it transports passengers.

Highways England says that, in addition to testing the wireless and in-road charging solutions for electric vehicles, they are committed to installing plug-in electric charging stations every 20 miles on the highway. 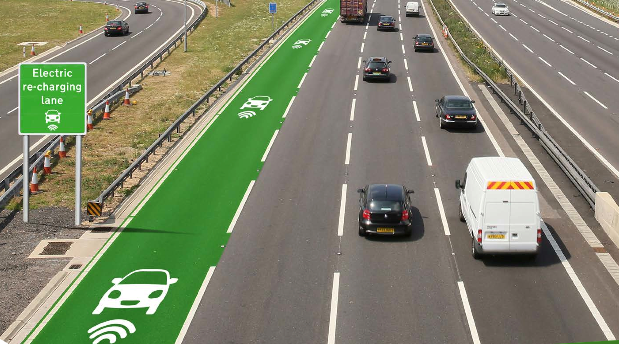